Outside the Kentucky Derby Gates 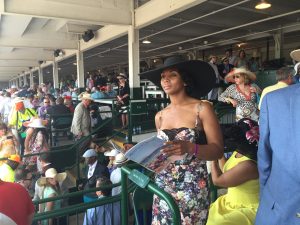 Every year, thousands of people travel to Churchill Downs to witness America’s most famous horse race, the Kentucky Derby. Also dubbed ‘the Run for the Roses,’ it is America’s most exciting two minutes in sports as the actual race only lasts that long, even as the festivities go on for about two weeks.

I was one of those people infatuated by the Derby and the opportunity it presents to get dolled up and be amongst good looking people, dressed to the nines. I still love it!

Churchill Downs is a pleasant sight to see during the Kentucky Derby. Pomp and glamor galore, gorgeously dressed ladies flouncing their Prada stilettos and elegant hats, and men strutting suits and straw fedoras while drinking mint juleps with opulent anticipation for the hoof-pounding competition.

The scene with its mixture of race spectators ranging from millionaires to royalties and celebrities depicts Kentucky’s connections with the romantic ideas of the Old South.

However, just a few yards away, at the base of this seasonal destination, is a sharp contrast and rotting air of desolation. Here we can find peeling shotgun houses and eroding streets with residents huddled on their lawns and driveways while trying to gain the passing tourists’ attention.

Although many might look to the Kentucky Derby experience with great splendor, it is a tale of two cities, separated by diverse factors and realities.

Many of the residents living near the racetrack see Churchill Downs as just something they can only witness from their porches and windows. There they sit, watching wealthier, primarily Caucasian members from the city and across America coming together to have a good time and enjoy the ‘time honored’ event. The Derby, as it is locally called, appears to them as an enduring symbol of Louisville’s inequalities and segregation. It is not as though residents are particularly unwelcome to the legendary event. But the steep fees and atmosphere of the rich, famous, and well-off keep many disconnected from one of the city’s most notable events.

The local community, made of about 23.6 percent Blacks, would have their own kind of horsepower at the city’s predominantly Black West end, also called West Broadway, parading souped-up cars and playing music. This makeshift street party had been in existence since the Jim Crow era. It was a time for backyard barbecues and lively family get-togethers. However, unlike the Kentucky Derby, it was a ‘Derby’ fiesta without the thoroughbreds.

Black Jockeys and the Kentucky Derby

Kentucky Derby, known for its rich and famous gathering, was an almost Black fest in the early days.

When the first Kentucky Derby was launched in 1875, blacks made all but two jockeys, including winner Aristides, Oliver Lewis. At the time, horse racing was populated by former slaves taking the ranks of trainers and jockeys and subsequently winning over 14 times for the first 28 years. But by the 1890s, the Jim Crow laws destroyed these outstanding achievements. Subsequently, the years 1921 to 2000 saw no black jockey on the tracks. However, a break came in 2000 when Marlon St. Julien became the first Black jockey to ride in Kentucky Derby after 79 years. That break ended in 2013 with Kevin Krigger, who was the last black man to ride in the Derby, until this year.

Kendrick Carmouche made history in the 147th Kentucky Derby competing as the first Black jockey since 2013.

To honor their contributions to the Derby and of-course stemming from the years of segregation, the ‘Broadway cruising’ (as the Black festivities at the West End was fondly called) was their Derby tradition. Over the years, this street party began attracting over 100,000 people annually. Nonetheless, all that changed when it was banned in 2006, following deadly gunfire in 2005.

Since then, the locals have felt an enormous disconnection from the festivities. They no longer have a way to honor their contributions to this great horse race. This is why Jecorey Arthur, a Black musician who, at 28, was elected to Louisville’s Metro Council in 2019, calls the ban a modern-day Jim Crow as it provides more reasons to exclude African Americans from the Derby festivities.

No Economic Impact from the Million-Dollar Event

According to Louisville Urban League, over 35 percent of African Americans living in the area, including the desolate homes 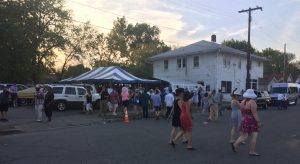 near the race track, live below the poverty line.

Yet, the Kentucky Derby generates on average $400 million annually that does not trickle down to the surrounding residences in any form of investment.

Before now, some could look forward to ‘Broadway Cruising’ as an opportunity to display their products and enjoy a bit of revenue in the same way as the rest of the city.

Even Derby attendees, for the most part, do their best to get in and out of these areas as quickly as possible, choosing to drink, eat and sleep in other parts of the city, miles away from the track.  The locals are forced to do whatever they can to make a buck, usually as Uber or Lyft drivers.  However, those living very close to the track can look forward to bringing in at least an extra $300 per day, from leasing their driveway and lawn spaces for about $10 to $60 to those attending the Derby. People living farther out often end up with nothing, although many spend their day during the Derby bellowing at the passing tourist-cars hoping for a miracle.

But that’s the height of the positive benefits they receive. The rest comes in traffic jams and occasional violence, further maligning residents and reminding them that discrimination and segregation is still alive. 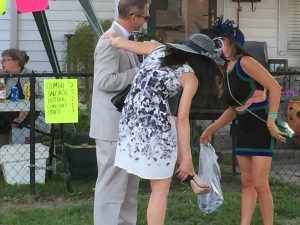 No doubt that even as the Kentucky Derby can be a fantastic experience, it is one that also shows the harsher realities of America’s history, with an enormous gap between the poor and the rich.

A 2016 study by Brookings Institute ranked Louisville as the 15th highest concentrated poverty level out of 17 peer cities in the region. Many living below the poverty line can be found at the Black West end right next to a hot destination that generates more than enough to transform lives in the region. A neighborhood such as this deserves interventions, not just in terms of jobs but also in housing, health, and quality of place. There is a need for neighborhood-focused and human-centered interventions. The facts are indisputable; the neighborhood that sits outside the Derby gates deserves a lot more than what it has been left to deal with.  Or perhaps you may think otherwise.

As we attend our Derby themed parties, or for some of us, as we attend the actual Kentucky Derby events, let’s be mindful of our history and the often harsh realities of those that live in the neighborhood right outside the Derby gates.  The people that live in that neighborhood have a history just as rich as the Derby history.  Is the history of the people living in poverty outside the gates as important as the history of the actual Derby? I wonder if it is just a matter of time before the neighborhood outside the Derby gates looks completely different – environmentally and economically.